If you’ve read any biographical information about Dr. Gregg, you’ll know that when he was quite young he had a legal dispute with Thomas Malone, another shorthand inventor/teacher who had authored “Script Phonography”.  Dr. Gregg worked as a teacher for Malone, and when Gregg created his own system Malone took him to court over the rights to the “light line” system that Gregg produced.

Gregg left the UK, and Malone never prevailed in court.  I’ve always wondered about the basis for this dispute, and recently found a later printing of Malone’s system on Amazon.  It’s the 29th edition (amazingly) and published by Clark’s College in London, “The Proprietors of the System”.  No date, unfortunately, but I’d estimate 1910 or so.

There are clearly some philosophic similarities with Gregg shorthand.  The outlines are different, but the principles seems much the same.  The systems clearly diverge, though, because Malone used shading (called “thickening” in the text) to distinguish “s” and “z” for instance.  So clearly he did not maintain the “light line” principle, as Gregg did.

Here are a couple of pages from the book, one presenting the alphabet, and the other presenting principles of joining. 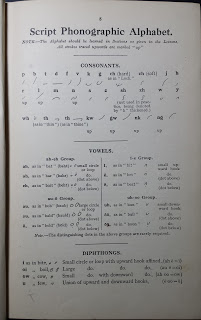 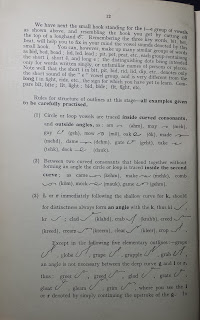 Previous post: [ The Legends of Shorthand ]
Next post: [ Receipts found in Shorthand Simplified from 1960 ]
5 comments Add yours